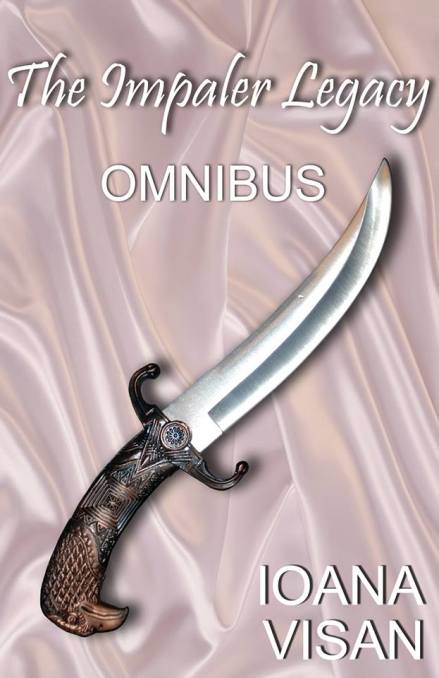 Please welcome Ioana Visan on her blog tour stop for The Impaler Legacy Omnibus.  We have an excerpt for you. 🙂

In a world crawling with vampires, Romania is the safest place left on earth. Thanks to the Little Council, there hasn’t been a vampire on Romanian ground in over five centuries, until one day when Liana Cantacuzino is ordered to bring one in, covertly.

Enter Maximilien Hess, a thousand-year-old vampire determined to ruin the existing order of things. When all is revealed, Hess’s secret changes everything, and a reluctant alliance is formed because the alternative is much worse.

The Impaler Legacy Omnibus, a vampire saga like no other, includes:

A Victory that Counts (novella)

“Wait.” I raised a hand. “Who offered the ransom?”

“Those whom you want to destroy,” came the answer.

I suppressed a shiver. They finally acknowledged our presence, and they saw us as a threat.

“The good news is,” Herve said, “they want you alive.” He paused. “On a second thought, that might not be such good news. You know how they are.” He grinned, but there was no humor behind it.

“Right. Thank you for the warning, but we really have to go,” Trotuş said and signaled the other pandurs to take their position.

While in charge with my security for years, he rarely went over my head giving orders. I usually called the shots. But when Max got up to follow them, I realized that they both took things seriously. Jesse didn’t move.

I leaned back in my chair and looked at my informer. “Why are you telling me this? If the reward is that big, why aren’t you cashing it in yourself?”

“I’m not a mercenary, and I’m not a hero either. As you must have figured out by now, I’m a schemer. It suits me better working for you than serving them.” He pondered. “How long do you think someone like me could survive among them? They don’t mind killing their own.”

Standing across the table from me, Max’s eyes darkened. Herve was right. The new breeds would kill anyone who got in their way, regardless of class or status, and right now, we were very much in their way.

I removed the napkin from my lap and dropped it on the table. Another dead end. Fine, we go. I sighed to myself. But before we left, I had one more question to ask. “What was the second name you had for me?”

“Ah, yes, Mr. Keller.” Herve nodded. “In fact, I took the liberty to arrange a meeting with him for ten o’clock.” He checked his watch. “We should hurry.”

The name didn’t sound familiar. “Who is he?”

“He’s—what do you call them, new breeds?—only that he’s an older one. He’s been around for a while, set up a successful business, made some connections in town … you know the type,” Herve said.

“And he wants to talk to me? Why?” I asked, having learned my lesson.

“Older new breeds, if they get this far, are harder to manipulate than newborns, much harder. And sooner or later, they discover there’s more to life than just killing. I’m assuming he wants some kind of a deal.”

“What can he offer me in return?”

“You’re not paying attention,” Herve chided me. “He’s old and well-connected. He’s the one you want to talk to about the bigger picture. Even if he’s not actively involved, he’s more likely to know something about it.”

I could find no flaws to his reasoning. I turned to Jesse. He wasn’t happy with the new development, but he wasn’t protesting, yet. “Just this time, and then we return to the camp,” I said in an even tone.

Award-winning writer Ioana Visan has always dreamed about reaching the stars, but since she can’t, she writes about it.

After fighting the apocalypse aftermath in “Human Instincts”, she played with shapeshifters in “Blue Moon Café Series: Where Shifters Meet for Drinks”, and then she dealt with vampires in “The Impaler Legacy” series, before tackling longer works like a fantasy trilogy and a science fiction series.

Aside from publishing short stories in various Romanian magazines and anthologies, she published a short story collection “Efectul de nautil” and the Romanian edition of “Human Instincts”.

She was awarded the Encouragement Award by The European Science Fiction Society at Eurocon 2013.

Enter below for the Rafflecopter Giveaway