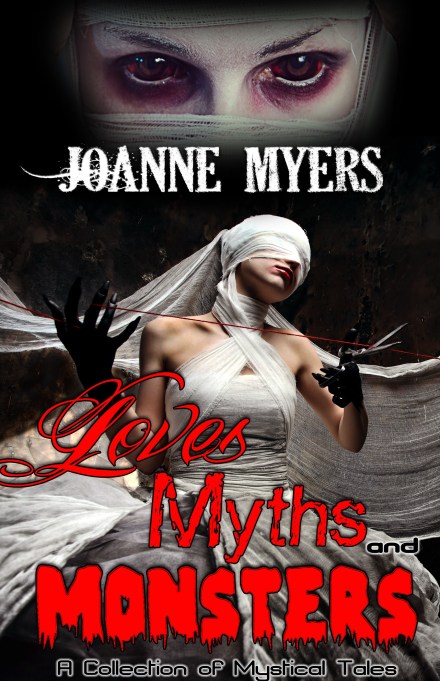 Welcome to Sensuous Promos Book Tour for Loves, Myths and Monsters! JoAnne Myers has quite a few books out there, and this is one you don’t want to miss!

11 urban and mythical tales entwined within the human world and starring the
Mothman, the Chupracabra, time travel, reincarnation, a demonic cellmate, a
Quaker love story, werewolves, mermaids, and a serial killer family from 1873.

Excerpt
from “Moon People”
Drake
laid it on really well. “I thought I loved Constance, but after seeing you, I
knew we were soul mates,” Drake told Vanessa. “I’d like to take you to the
festival today. Meet me at the backdoor of the fun-house, but don’t tell
Constance, I don’t want her following you and making a scene.”
“You
made a wise decision, Drake,” Vanessa said. “I’ll be there in ten minutes.”
I
knew Vanessa would bring Gretchen, and that was the plan.
At
the fun-house, I hid inside when Vanessa and Drake entered. The exhibits were
not open to the public for another two hours, so—if my plan failed—Drake and I
both were dead.
Taking
Vanessa by the hand, Drake led her down a dark corridor. “Where are you taking
me?” she asked playfully.
“There’re
monster masks on this side of the fun-house,” he said, leading her to the back
door and abruptly stopping.
Looking
around, Vanessa saw nothing but janitor equipment. “Hey, what’s gong on?” she
asked, confused. “Where are the scary masks?”
“Right
here,” Drake said, removing the dried seaweed from his pocket.
He
threw it into her face, blinding her and scorching her flesh. Screaming as loud
as she could, she turned to ash.
“You
bastard!” Gretchen shouted on hearing Vanessa’s death scream. “Better ones than
you and Constance have tried to kill me and failed.”
Taking
off like a shot, Drake ran down an opposite hall leading into the maze of mirrors
with Gretchen following. From where I stood, I heard their approaching
footsteps and raced to the other side of the maze.
Suddenly,
Gretchen cornered Drake. When Gretchen realized he was out of seaweed, she
advanced slowly, enjoying every instant of his anticipated murder.
Listening
to her steps, I knew exactly where she was. Immediately, I flipped on the
overhead lights, giving Gretchen the shock of her life. She was in the maze of
funny mirrors surrounded by images depicting her beautiful face as distorted
and grotesque. Horrified, she became hysterical before melting into a stinking
ooze of fish scales.
“Gross!”
Drake said.
“Yes,
but it’s over. Willowick is saved,” I said, and slowly I crept into his arms.
Afterward,
I used my conch and contacted Poseidon and the others. I told them they were
unwelcome in Willowick. Instead, I suggested they go far away into Asian
waters, telling them it was too dangerous here, humans had learned how to kill
our kind.

JoAnne lives in Ohio, and works at a local nursing home. The author of 7 books, JoAnne also canvas paints. JoAnne enjoys time with relatives, her dog Jasmine, and volunteers her time within the community. She is a member of the International Women’s Writing Guild, Savvy Authors, Coffee Time Romance, Paranormal Romance Guild, True Romance Studios, National Writers Association, the Hocking Hill’s Arts and Craftsmen Association, The Hocking County Historical Society and Museum, and the Hocking Hills Regional Welcome Center.  JoAnne
believes in family values and following your dreams. Her original canvas paintings, can be found at: