Hi, everyone! Thanks to Eloreen for having me on her blog today to talk about my new release, The Player’s Protégé. This is the second story in the Campus Connections series and features Jerry, the cynical best friend of Eric from The Kinsey Scale, and Arlo, a sweet, inexperienced guy for whom Jerry becomes a mentor.

This is blog post #1 in The Player’s Protégé blog tour, so why don’t we start at the beginning with some of Jerry and Arlo’s childhood memories?

I’m interviewing each one separately, because they aren’t together yet.

Tell me some of your best childhood memories.

Jerry: My childhood was basically utter crap. I was a flaming queen, even as a boy, but I grew up in the middle of Texas and my dad was a macho oil man. So you can imagine how my being gay went over with him and all the other homophobes around. But you were asking for good memories. Mom taught me how to sew when I was in the sixth grade. I fell in love with fabrics and fashion and creating costumes. Mom’s sewing room was my safe haven.

How about one of your worst childhood memories?

Jerry: Did the “utter crap” remark pique your interest? I was the target of mean and toxic boys insecure in their own masculinity from first grade on. I never made any secret of my feminine side—I couldn’t, because it was just me. I fought back with snarky remarks that mostly went over their heads and when the bullying turned physical I could usually outrun them. One time I didn’t. After they beat me up, I vowed I’d never let anyone get to me like that again—physically, emotionally, or any other way. And I haven’t.

Tell me some of your best childhood memories.

Arlo: Growing up on the dairy farm was mostly real fun. We worked hard but we all got along. I have fond memories of my mother’s Mexican cooking. A favorite memory is when I discovered Tae Kwon Do. A martial arts studio opened up in Lancaster and my parents enrolled me in a class. I watched these guys and gals in white robes and bare feet doing these amazing moves and I was hooked. I’ve been doing Tae Kwon Do ever since.

How about one of your worst childhood memories?

Arlo: My dad getting sick. He has MS which was diagnosed when I was around seven. I still remember seeing him in pain and having to be in bed or a wheelchair at times. It was so hard because Dad had always been Superman in my eyes. He could do anything. To see him helpless, felled by this disease, really shattered my comfortable world. Luckily, the disease has periods of remission fairly frequently. But my dad having to deal with a chronic illness shaped me. My friends call me a caregiver. I guess I am.

Thanks for stopping by on The Player’s Protégé blog tour. If you want to follow along as Arlo and Jerry’s story progresses, check my website at http://cjaneelliott.com/the-players-protege-release-and-blog-tour/ for a schedule of all the tour dates and more chances to win.

When his friends bet cynical Jerry that he can’t turn sweet Arlo into a player, Jerry might win the bet but lose his heart.

College senior Jerry Helstrom survived a gay childhood in Texas by being fierce and fabulous. At school he’s known as a player and has kept his heart so guarded that he’s forgotten he has one. When his friends bet him he can’t teach inexperienced Arlo Barnes to become a stud like him, Jerry takes on the challenge and quickly finds himself drawn to his enticing trainee.

Arlo kicks butt as a Tae Kwon Do black belt, but his sexual game is lacking. He’s been dumped by his only boyfriend and needs help getting himself out there. Enter Jerry Helstrom, player extraordinaire and happy to provide Arlo with some hands-on coaching. Jerry encourages Arlo to ask for what he wants in sex and in life, something Arlo struggles with. The struggle deepens when Arlo discovers that what he truly wants is the seemingly unattainable Jerry Helstrom.

Jerry can teach Arlo to play the field, but can Arlo teach Jerry to play for keeps?

After Arlo left, Tyrone blew out an exasperated breath. “Why’d ya have to be so mean, boo?”

“I don’t know what you’re talking about.”

Eric laughed. “Jerry’s mean to everyone at first. Right, Will?”

“I never noticed,” Will drawled.

“You wouldn’t.” Eric leaned in for a kiss. “But believe me, he had you down as a boring sports jock.”

“Hot, though,” Jerry murmured. “That won you points right away. And the fact that you were driving Eric crazy was entertaining.”

“For you.” Eric glared at Jerry.

Will put his hand over Eric’s. “Yeah. Eric was driving me crazy too. Blue balls city, man.”

“Oh my.” Jerry put his chin in his hands and widened his eyes. “I always wondered how y’all managed to beat off with the other one right there. Do tell.”

Tyrone held up his hand. “Guys, guys, can we have this conversation another time? Y’all need to help me talk Jerry into mentoring Arlo.”

“Mentoring him in what?” Eric raised laughing eyes to Jerry. “Although I can think of several areas.”

<em>I miss you</em>. It came out of nowhere. He and Eric had been thick as thieves all through college. Once they sorted out that they weren’t meant to be boyfriends, they’d remained best friends and shared countless late-night conversations in this very restaurant. Most of them this year had been about Eric’s seemingly hopeless crush on Will. But all of that had come to a halt now that Eric and Will were lovers. Not that Will would mind if Eric and Jerry continued their habit of hanging out in Alekos. At least Jerry didn’t think he would. But Will and Eric were currently wrapped up in their own romantic world.

Jerry shook his head and focused in on what Tyrone was saying.

“… and since Jake dumped him on his ass after cheating on him, Arlo’s been moping around. We were talking, and he was telling me that he needed some advice about getting out there. Jake was the only guy he’s ever dated, and he needs help in figuring out the hookup scene.”

“That guy? Wants to dive into Grindr?” Eric shook his head. “I can’t see it.”

“Well, that’s what he tells me,” said Tyrone. “And who better to teach him but our Jerry here? Gay stud extraordinaire.”

“You called me a stallion before. Make up your mind.”

Will smirked. “Given the look on your face, Jerry, I’d say the odds of you performing this service are nil to none.”

“Owes you for what?” Eric asked.

“For hooking him up with Ted. Too bad they were together for, like, two seconds.”

Jerry huffed. “I never meant it to be a thing. Although our little affair did have its moments. But still, the answer is no. Think of something else for me to do.”

Jerry narrowed his eyes at Eric. “Impossible? I never said that.”

“Well, I’m saying it. That guy Arlo? You’ll never turn him into a player. He’s a one-man type. I can spot it a mile away.” Eric hugged Will. “This guy’s the same.”

“You all are truly over the top. But you’re wrong, Eric. I’m sure I could transform Arlo into a player if I put my mind to it.”

Eric’s clear disbelief goaded Jerry into rashness. “Sure. What do you want to bet me?”

Tyrone clapped his hands. “I knew you’d do it.”

“Hmm.” Eric tapped his fingers on the table with a thoughtful air. “If you turn Arlo into a player, I’ll do your laundry for a week.”

“Please. You’d mix the fabrics, turn my whites pink, and shrink my favorite shirt.” Inspiration struck. “How about, if I win, you tear yourself away from Will there and commit to regular late-night Alekos runs with me? Plus one cage dance at Club Risque?”

“Okay. And if I win, you do my and Will’s laundry for a week, plus make us cool costumes for Pride.”

“Deal.” Jerry extended his hand, and Eric shook it. If Eric thought he could win this bet, he was seriously underestimating Jerry’s abilities. 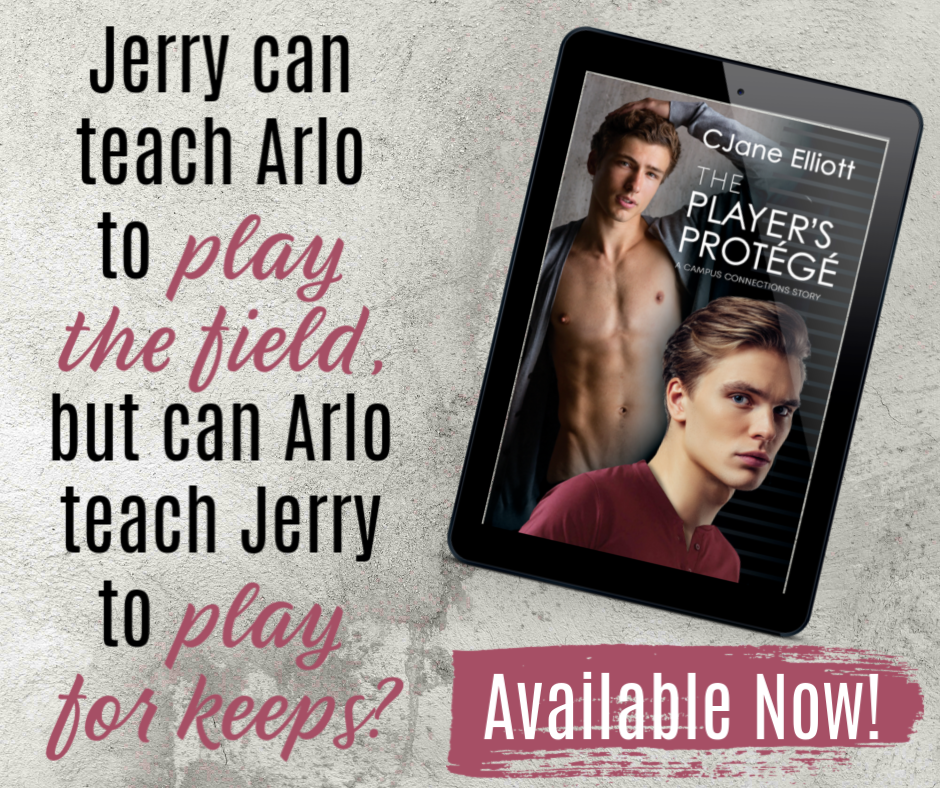 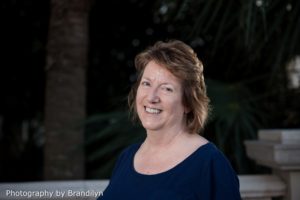 After years of hearing characters chatting away in her head, CJane Elliott finally decided to put them on paper and hasn’t looked back since. A psychotherapist by training, CJane enjoys writing sexy, passionate stories that also explore the human psyche. CJane has traveled all over North America for work, and her characters are travelers too, traveling into their own depths to find what they need to get to the happy ending.

CJane is an ardent supporter of LGBTQ equality and is particularly fond of coming-out stories. In her spare time, CJane can be found dancing, listening to music, or watching old movies. Her family supports her writing habit by staying out of the way when they see her hunched over, staring intently at her laptop.

CJane is the author of the award-winning Serpentine Series, New Adult contemporary novels set at the University of Virginia. Serpentine Walls was a 2014 Rainbow Awards finalist, Aidan’s Journey was a 2015 EPIC Awards finalist, and Sex, Love, and Videogames won first place in the New Adult category in the 2016 Swirl Awards and first place in Contemporary Fiction in the 2017 EPIC eBook Awards. All the Way to Shore was Runner Up for Best Bisexual Novel in the 2017 Rainbow Awards.

Enter the Rafflecopter for a chance to win a signed paperback copy of one of my novels.

Nick Andrews has grown up in poverty in a tiny village. All his life he’s been told that he’s useless. After getting one scolding too many he decides to go far away, off to sea. But his experience as a farmhand has done little to prepare him for the hardships of a sailor’s life.

When his ship is attacked by pirates, Nick’s life is miraculously spared by the notorious pirate captain, Christopher Hart—a man in charge of a crew feared for their brutality. Nick is forced to join the pirates, and he dreads finding out for what reason the captain has saved him.

But Hart is nothing like his reputation suggests, and Nick soon finds himself entangled in a relationship that could endanger both their lives. Unless Nick can help Hart on his quest to find a long lost treasure, their forbidden love may tear his new life apart.

Elvira Bell lives in Sweden and spends most of her time writing, reading or watching movies. Her weaknesses include, but are not limited to: vintage jazz, musicals, kittens, oversized tea cups, men in suits, the 18th century, and anything sparkly.

Elvira writes m/m fiction with a touch of romance and has a penchant for historical settings. She adores all things gothic and will put her characters through hell from time to time because she just loves watching them suffer. It makes the happy endings so much sweeter, after all.