Please welcome to Moonbeams over Atlanta, the return of the annual Queer Sci Fi’s (5th) Flash Fiction Anthology published today in eBook or Paperback. For the fifth year in a row, I have a story published in it. *smile* Note the chance to enter a Rafflecopter giveaway below.

1) Seasonal movement of animals from one region to another.

2) Movement of people to a new area or country in order to find work or better living conditions.

3) Movement from one part of something to another.

Three definitions to inspire writers around the world and an unlimited number of possible stories to tell. Here are 120 of our favorites.

Migration features 300 word speculative flash fiction stories from across the rainbow spectrum, from the minds of the writers of Queer Sci Fi.

Queer Sci Fi is giving away a $20 gift Amazon certificate with this tour – enter via Rafflecopter for a chance to win:

Each year, hundreds of writers send in stories for the Queer Sci Fi flash fiction anthology. Here are the opening lines from some of the stories chosen for the 2019 edition – Migration:

“Darkness has substance. It is tangible; different shades within the black, sounds, a taste. It is accompanied by self-awareness of time and thoughts, even when other senses fail.” —Hope for Charity, by Robyn Walker

“The sky has been screaming for five straight days when the shrimps come to take us away. They’ve been boxing up the others and hauling them off. Now they’re here for us, soaking wet, dragging cords and crates behind them.” —Shrimpanzee, Sionnain Bailey

“Allister always had faultless hair. He’d comb and gel it to perfection while gazing in the mirror. One day a pair of eyes stared back.” —Zulu Finds a Home, by Kevin Klehr

“On her sister’s wedding day Ari noticed that one of her ears had migrated to her hand. It was right after her high school crush, Emily, arrived with Cousin Matt.” —Playing It By Ear, Aidee Ladnier

“The wound was fatal. Their vessel wouldn’t live much longer. This is what came from leaving loose ends. Frantically they sought out a new vessel to migrate to. “ —The Essence, by L.M. Brown

“That night, we were sitting in the bed of her daddy’s old pickup truck and the radio was playing the best song. We had a pack of cigarettes between us and her hand was almost touching mine. The wheat field was silver in the moonlight. When they came, we weren’t surprised, just disappointed that our time was up already.” —Our Song, by Lauren Ring

“Willow said she was my wife, but I knew it wasn’t her, not the right her, anyway. Sure she looked like her with olive skin and bright pink hair. She even smelled of mango flowers, just like I remembered, but there was something about her smile that was slightly off, something about when she said she loved me that didn’t sit well in my old heart.” — They Said It Would Be Her, by Elizabeth Andre

“Agnes is eight when she first sees the river. Cutting its way through town, the only thing she knows not coated in coal dust. She sticks her toes in, comes home with wet socks and a secret. See, the river hadn’t been there yesterday.” —Stream of Consciousness, by Ziggy Schutz

“Terry twirled in her green synthsilk dress, looked at her reflection, liked what she saw. She felt good in her own skin, for maybe the first time.” —Altball, by RE Andeen

“The thing was in the corner. It had come through the window and had slid down the wall. Scratch went the sound. The noise of a hundred nails clawing at the wood. Nails of white bone. Alex pulled the sheets up quickly, covering every inch of skin and hair in a warm darkness.” —Whose Nightmare, by Jamie Bonomi 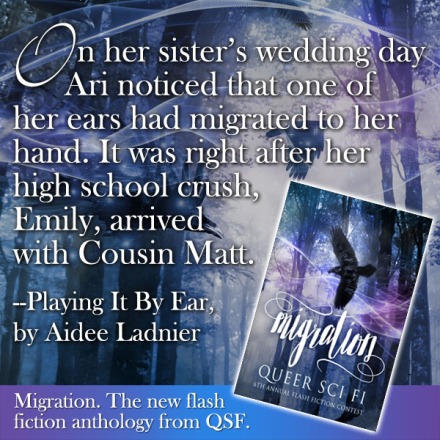 A hundred and twenty authors are included in Migration: